I 'broke up' for the holidays a week last Wednesday (the day of my last blog) and due to various commitments I have only been down to The Swannery to  have a quick look round on five of the last nine days and with little results. Today was probably the best however as I was able to put in a couple of hours and there was a nice number and selection of birds to go through. Highlights included the flock of Knots pictured above. Regular passage migrants to The Swannery in spring and autumn they are usually few and far between in the winter months, though this time last year I had a flock of around fifty! A Green Sandpiper (heard but not seen) was also unusual for the time of year, as was a Blackcap - a lack of late berry-bearing shrubs on my patch makes them more regular in the village, but the mild conditions and associated insects makes the sighting less unusual perhaps. A Chiffchaff and several Redwings called from the depths of the willow maze and the three Scaup were still with the Pochard flock. Earlier in the week I thought for a moment that there were four Scaup but quickly realised that last winter's Tufted Duck x Scaup hybrid had reappeared. It looks very similar to a female Scaup (and has been claimed as such at Radipole and at The Swannery previously) but there are subtle differences. I will endeavour to get a photo if it lingers! 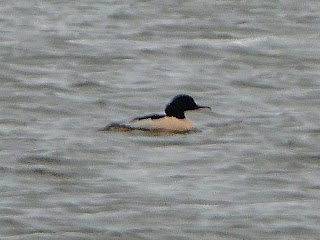 Back to today though, another interesting bird was this gull... far right...

And second from left above... A Herring type with pink legs it was noticeably darker mantled than it's companions whatever it's attitude or position in the flock. It may well be a Scandinavian bird but it lacked other typical argentatus traits such as larger size and more white in it's primaries so the jury's out. The only other notebook entries over the last week were a few Mediterranean Gulls and a single Brent Goose.
Elsewhere on The Fleet the Hume's Leaf Warbler still lingers, a 'redhead' Goosander was seen and as speculated in my last blog the now almost regular Barnacle Goose flock has reappeared for their third winter at Rodden Hive although they have yet to visit The Swannery and again they have a hybrid in their midst that I tentavily identified as a Barnacle x Ross's Goose last year but 'ansers' on a postcard please or should that be 'brantas'... see what I did there?
A happy and bird filled New Year to you all!
Posted by Steve Groves at 20:59 No comments:

The male Goosander reappeared last Friday and is still present off and on, though distant...﻿
﻿
And the lonely first winter male Scaup has at last been joined by two females but three is still a very low count for this time of the year here. Dabbling duck numbers are also low with a couple hundred Teal and considerably fewer Wigeon and Shoveler...
In the withies a few Chiffchaffs, Cetti's Warblers and Goldcrests are still vocal and Fred (one of the ringers) had a Firecrest yesterday that I failed to see, having to content myself with seeing a few of the ten plus that are present at the nearby Sub-Tropical Gardens while running an erand there today. On leaving my cottage yesterday for the short stroll to work I at last saw a Redwing my first of the autumn/winter. A wintering species I usually see (or at least hear in the night sky) for the first time by the end of October not as late as December! And today there was not one in the hedge (that runs from my cottage to The Swannery) but a flock of sixty plus! Presumably downed in the heavy rain overnight. Other highlights since my last blog were a Marsh Harrier yesterday (again missed by me but seen by Fred and also picked up by mates Alan, Mike and Cliff at nearby West Bexington) and two flyby Knots on Monday, plus the usual scattering of Mediterranean Gulls.
Last Sunday was December WeBS Count day and the figures for The Swannery to Rodden Hive Point were as follows...
Mute Swan 267
Shelduck 17
Wigeon 5
Teal 220
Mallard 496
Domestic Mallard 9
Shoveler 37
Pochard 550
Tufted Duck 260
Scaup 1
Goldeneye 8
Red-breasted Merganser 15
Cormorant 4
Little Egret 3
Grey Heron 3
Little Grebe 25
Great Crested Grebe 10
Moorhen 11
Coot 260
Lapwing 60
Redshank 5
Black-headed Gull 42
Mediterranean Gull 1
Common Gull 3
Lesser Black-backed Gull 2
Herring Gull 21
Great Black-backed Gull 9
Kingfisher 1
Elsewhere along The Fleet, as last week, the Hume's Leaf Warbler and Richard's Pipit still linger in the Littlesea Holiday Park/Bridging Camp area and at least one Black Brant is still with the Brent Geese.
Posted by Steve Groves at 16:12 No comments:

'We Say Goosander, They Say Merganser!'

Over the last few days I've again been using up leave to try and get some more DIY done at home before Christmas, in what is our slightly quieter period at The Swannery, before the real preparations begin in the new year to re-open to the public in March. Therefore I haven't been getting out much and when I have there has been precious little to see. The highlight last week was a male Goosander feeding with the regular Red-breasted Merganser flock. Only just about annual at The Swannery they certainly don't live up to their official International (Americanised) English name of Common Merganser here with their Red-breasted cousins being far commoner!

Despite the relatively colder weather wildfowl numbers seemed to have dropped if anything with still only the one Scaup present.
A lone Brent Goose (or if you prefer the International Ornithologist's Union version... Brant Goose!) settled on the beach opposite was unusual but it was just a 'Dark-bellied' and not the hoped for 'Black Brant'. The only other birds that made the notebook were a few Mediterranean Gulls, 4 Redshank, a group of three Mistle Thrushes and a Fieldfare and two fine male Bullfinches. Also Goldcrests, Chiffchaffs and Cetti's Warblers are still very much in evidence.

And finally elsewhere on The Fleet there have still been sporadic reports of the Hume's Leaf Warbler and Richard's Pipit lingering in the Littlesea/Lynch Cove area and also at least one of the Black Brants is still present.

Posted by Steve Groves at 20:32 No comments:

'Do It Yourself' for me - a 'Surfeit Of Sibes' for others.

I have very little to report this week as I had the week off to do some much needed home improvements and was so busy I didn't get down to The Swannery to do any birding until Friday! I also did a circuit of the hides and withybeds yesterday and today when I fed but found little of note. There was still good numbers of wildfowl... 500 or so Teal along with smaller numbers of Pintail, Wigeon, Gadwall, Shoveler and Shelduck in the meadow, while on the Fleet the single 1st winter male Scaup was the highlight in the Pochard and Tufted Duck flock (there were a dozen or so Scaup this time last year!). A small flock of Red-breasted Merganser is now in evidence but the only geese are the usual Canada flock...it will be interesting to see whether the presumed wild Barnacle Geese present in the last two winters will reappear this year, but we may need some cold weather to encourage them. In the withies there are still more Goldcrests than usual and a few Chiffchaffs and Cettis' Warblers. The last two winters finished off the wintering individuals of the last two species but unusually not the former! There have been a number of gulls to check through but a few Mediterraneans Gulls was the best I could do. As I haven't been getting down to the patch this last week until the afternoons the poor light saw that the camera didn't even get an airing but I took the following shot last week...

Although it's been pretty quiet at Abbotsbury elsewhere on The Fleet several Siberian birds have been around... the Hume's Leaf Warbler (a first for The Fleet recording area) is still at Littlesea Holiday Park, a Richard's Pipit was seen flying up The Fleet by the Bridging Camp and up to three Black Brants are present. Although I've seen the latter many times on The Fleet I still haven't seen one at The Swannery but as it's still officially considered the Pacific race of Brent Goose (with those on The Fleet no doubt originating from the east rather than from America) even if I do finally connect with one this winter it won't be an official tick and the chances are slim as the Brent flock rarely strays west of Rodden Hive. I checked the Meadow Pipit flock in The Swannery meadow today for the Richard's but to no avail. I'm back to work tomorrow though so I should spend a lot more time in the field and therefore hopefully connect with something more exciting... maybe even a Black Brant!