It's been awhile since my last blog but there really hasn't been much to report until this week!
We have, however, managed to trap and ring a few ducks in the decoy for the first time in two years. The lack of decoying has largely been due to the disturbance caused by The Decoy Restoration Project but at least now that it's almost complete will will have a decoy pond for hopefully many years to come. Unfortunately all the duck caught so far this year have been Mallards...

The above photo's are courtesy of Swanherd Dave Wheeler as I was busy ringing!

Although we have only managed to trap a few Mallard there have been a nice selection of the commoner ducks and other wetland species present, albeit in small numbers, as the results of The Swannery January Wetland Bird Survey reveal....
Mute Swan 375
Canada Goose 1
Shelduck 39
Wigeon 2
Teal 610
Mallard 377
Mallard (domestic) 9
Shoveler 45
Pochard 486
Tufted Duck 220
Scaup 1
Goldeneye 20
Red-breasted Merganser 25
Cormorant 1
Little Egret 2
Little Grebe 7
Great Crested Grebe 3
Moorhen 10
Coot 290
Oystercatcher 2
Lapwing 435
Snipe 4
Redshank 5
Black-headed Gull 40
Little Gull 1
Mediterranean Gull 2
Common Gull 4
Herring Gull 13
Great Black-backed Gull 8
Kingfisher 1
The Little Gull (just about annual at The Swannery) was the count highlight but unfortunately I missed it, as while count volunteers Alan and Mike were watching it at The Swannery I was still counting just to the east toward Rodden Hive Point. Not all the wildfowl and waders seen in the last few weeks were seen on the count though. 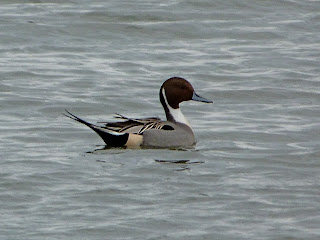 The Barnacle Goose has still been around and there has been not just one but three Scaup. The Redshank flock has reached 35 at times and up to 11 Knot have also been seen as has a Woodcock.

There has also been two different Marsh Harriers but the rarest sighting in the context of The Swannery was definitely this Razorbill...
Although relatively common on the seaward side of Abbotsbury Beach this is only around the third seen at The Swannery end of The Fleet lagoon in over twenty years. This despite guillemots being nearly annual on my patch and Little Auks being almost common in comparison!
I still need Puffin and Black Guillemot for the set though!

Posted by Steve Groves at 21:33 No comments:

I didn't get a chance to have much of a look round the patch this weekend... I popped down to feed today briefly without intending to do much birding but I did manage to flush a very wary Barnacle Goose from the Canada flock on the feeding ramp (which was presumably a wanderer from the flock that are still in residence in fields by the Fleet at nearby Rodden). During the week though I fared a little better... A Marsh Harrier quartered the western reedbeds on Friday before heading off towards Bexington and the fourteen Knot were still present at the beginning of the week but their number slowly dwindled to one by Thursday. Extremely low water produced an exceptional count for The Swannery of thirty Redshank and a record count of forty Mediterranean Gulls (still poor by East Fleet standards).


A Dark-bellied Brent Goose was seen briefly and dabbling duck were well represented with several hundred Teal, twenty plus each of Pintail, Shoveler and Shelduck and a few Wigeon and Gadwall. Due to the low water though the merganser flock completely decamped to deeper water. The Pochard/Tufted flock remained though along with the three Scaup but the Scaup x Tufted hybrid never reappeared. As for passerines a few Chiffchaffs were still around as were a few Redwings and a flock of fifty plus Greenfinches and fewer Linnets fed on the beach opposite. The strong winds at the beginning of the week blew in nothing more than a single Kittiwake (though did bring down a few small trees and a large bough!). I missed one of the best birds of the week as volunteer Dave Callaby found a Black-necked Grebe but unfortunately I failed to relocate it.
On Thursday we took advantage of the lack of water to go and have a look at the exposed 'Monks Wall' that stretches across the bed of The Fleet just to the east of the Swannery (I actually use it to denote the eastern edge of my patch). Nobody knows quite how old it is (probably from the time of the Abbotsbury monastery but some believe it maybe even Roman - sighting the name of adjacent 'Chester's Hill' as more than a coincidence) or what its' function was. Some say it was a causeway to the beach, others an attempt to drain the swannery embayment. Nobody knows!
Posted by Steve Groves at 18:32 No comments: