After the excitement of last week and it's 'white-wingers', the best I could come up with this week were 'black-neckers' (somehow I don't think the latter phrase will catch on). First this rather distant Black-necked Grebe that lingered all week...

and the over-wintering Barnacle Goose that is rather worryingly getting slightly less skittish, hopefully due to it settling in with its' feral Canada Geese companions rather than possibly revealing a feral origin of its' own.

The long-staying 1st winter Scaup was joined by an adult male and the probable hybrid female took a real shine to the newcomer, having ignored the young male all winter... 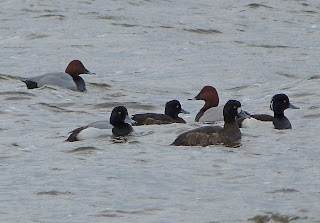 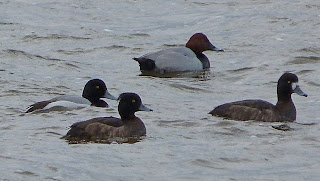 The only other sightings of note were the female Marsh Harrier (but no sign of the male), a few Mediterranean Gulls (nowhere near last weeks numbers) and a couple of Curlews in the meadow, where as usual at this time of year, with the inevitable decline of the Eelgrass in The Fleet, there was a small influx of grazing Wigeon...

If only there had been a Glossy Ibis too! With one at nearby Radipole this week and near misses at Burton Bradstock, West Bexington, Littlesea and Lodmoor in the last few years, surely it's only a matter of time?
Posted by Steve Groves at 18:32 No comments:

First there was this beautiful 'White Nun' the colloquial name for a drake Smew...


Smew (fish-eating ducks related to mergansers and goldeneyes) are a scarce winter visitor to the swannery from Northern Europe and it normally takes a severe cold snap to push them this far south-west. Even then we normally just see females or first-year males known collectively as 'redheads' for obvious reasons... having reddish brown heads and greyish bodies, lacking the near pure white plumage of the adult males.

Then following the white Smew came a flurry of white 'Mews' the colliquial name for gulls of course (see what I did there?). Most gull species have varying amounts of black in their wing-tips but a few have pure white wing-tips and as they also have very pale grey feathers on the upper-wing and mantle they appear almost pure white.

Of the latter there was a virtual blizzard, a record swannery count, of 350+ Mediterranean Gulls, many of them near pure white adults...


Then another beautiful 'white-winger'... a first-winter Iceland Gull (as predicted in my last blog), lingered briefly off 'Bum Point', unfortunately flying off over Chesil Bank before I could get a photo.

There has been a massive increase in 'Med' Gull numbers on The Fleet in recent years but this has until now been most noticeable in the East Fleet, with numbers at the Abbotsbury end of the lagoon barely affected... in fact I only had my first double figure count last year. Iceland Gulls however are a much rarer visitor (from Greenland and adjacent Canada, not Iceland!), with this week's bird being only my third at the swannery, although that's not counting a dead Kumlien's Gull (a form of Iceland Gull now believed to be a stable fertile hybrid with Thayer's Gull... which itself is still considered by the BOU to be a race of Iceland).

Non-white highlights this past week were... a Red Kite seen by visiting birders from the car park today, the Barnacle Goose still with the Canada Geese (it will be interesting to see whether it lingers well into the spring or decides to head north), the first-winter male Scaup still present and last weeks two Ruffs lingered until Monday. Also the two recent Marsh Harriers... the regular immature male and the occasional adult female, flew up the fleet together, lingered briefly over the western reed beds then went their seperate ways. Although it was a momentary encounter, perhaps the recent breeding at nearby Radipole/Lodmoor gives us reasons to be hopeful... watch this space!

Posted by Steve Groves at 16:40 No comments:

Although in my last post (last Sunday) I believed the cold snap was behind us... it came back with a vengeance, with night-time temperatures below freezing most nights this week and it only struggled a few degrees above most days. Despite this it brought in very little bird wise but presumably associated with the freeze were two Ruff in the meadow on Friday (with at least one still present today)...
And another highlight were five Egyptian Geese...

This naturalised goose is still a scarcity in West Dorset, despite spreading west into central southern England from its' East Anglian stronghold in recent years. I've had a few at the swannery before but these have been very tame and may have been escapes rather than naturalised birds. This week's five though were extremely wary even for 'feral' birds.
What I believe to be a wild bird though, the wintering Barnacle Goose, eventually gave itself up for the camera. Like the Egyptians it is very wary and was presumably left behind when the now almost regular wintering flock of Barnacles left Rodden Hive a few weeks back.
Today was the February Wetland Bird Survey count and I left WeBS volunteer Ian to count the swannery proper while I set off counting the stretch of the Fleet east to Rodden Hive point. The results were as follows:
<> <>

A good selection but very few gulls, as is the norm at the swannery during cold snaps. If the cold eventually does give way to some milder wetter weather then maybe I may get one of the numerous Iceland Gulls, part of a national influx, that are gracing the country at the moment! 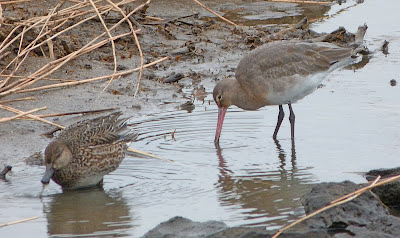 Posted by Steve Groves at 20:04 No comments:

Just when it looked like spring was only around the corner and many birds were tuning up for their full vernal performances (even the over-wintering Chiffchaff!) this went and happened...
﻿
﻿ ﻿﻿﻿
﻿﻿﻿﻿

Temperatures plummeted and the swannery embayment froze completely apart from where the streams flow in by the feeding area and at the 'Fleet Pipe'. At the latter there were several hundred Mallard, Teal, Pochard and Lapwing along with smaller numbers of Tufted Duck, Wigeon, Pintail, Shoveler, Shelduck, Dunlin, Redshank, Golden Plover and Snipe along with two Black-tailed Godwit and around twenty Knot but not the hoped for Long-billed Dowitcher that was later seen flying towards the swannery from nearby Rodden Hive. If it made it as far as the swannery I will never know as unfortunately I was at Dorchester Beer Ex at the time quaffing ales! Needless to say there was no sign of it the following day.
Before the mini-freeze hit the earlier part of the week was fairly quiet. The female aythya duck that I believe to be a Scaup x Tufted Duck reappeared though and eventually gave itself up for the camera! 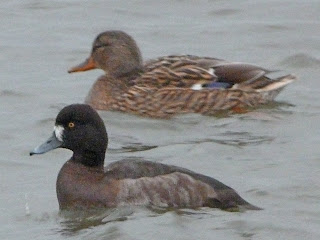 No matter what its' posture it shows a peak at its rear crown... not as distinct as on Lesser Scaup but not as subtle as it should be on (Greater) Scaup (in fact in the latter species it should be rarely visible at all). It also shows a contrast with the dark back and paler flanks... in (Greater) Scaup this should be concolourous.
Its' bill pattern appears good for (Greater) Scaup but as it states in the Collin's Bird Guide some can be difficult to recognise as hybrids. It also never associates with the Scaup and regularly comes in for grain, something the Scaup never do.

An immature male Marsh Harrier has been a near daily visitor but the female hasn't been seen for over a week now...

Other highlights of the past week have been several Mediterranean Gulls and the occasional flying visit from the Rodden Hive (presumed wild) Barnacle Goose with the Canada Goose flock.


Now hopefully with the cold snap behind us we can look forward to some early spring migration as all those lost yanks from last autumn, that wintered further south, make their way north! Maybe there's hope for a Dowitcher yet!

Posted by Steve Groves at 21:00 No comments: