Although arguably spring already, it was hard to believe this week with the low temperatures and bitter north-easterlies... Not very good timing to have a weeks leave, or was it!
As I was trying to have a bit of a break from my workplace and spend some quality time with Suz (despite the risk of missing something!) I only got a few hours birding in at The Swannery on Thursday (at lunchtime when all my colleagues were fast asleep!) and again (while I was on feeding duty) yesterday and today. Even so I managed to confirm the continued presence of most of the usual recent highlights...
﻿
Avoiding my camera though were the pair of Goosanders (far too distant), the male Marsh Harrier (distant and mobile) and a Jack Snipe (far too quick). And that was about it as I failed to find either the Black-necked or the Slavonian Grebe and bird numbers in general seemed to be dropping off with no gulls or passerines of note. My garden though which I count as part of my patch (being so close) held a Chiffchaff and unusually my feeding station continues to attract a pair of Nuthatches (always a bit hit and miss here) and up to three Jays (left-overs from the autumn influx no doubt). A few Redwings added to the wintery feel even if decreasing wildfowl and wader numbers didn't. The Lapwing flock for instance is now only about fifty strong, there were however around twenty Redshank, a few Common Snipe and a single Dunlin but very few dabbling duck. 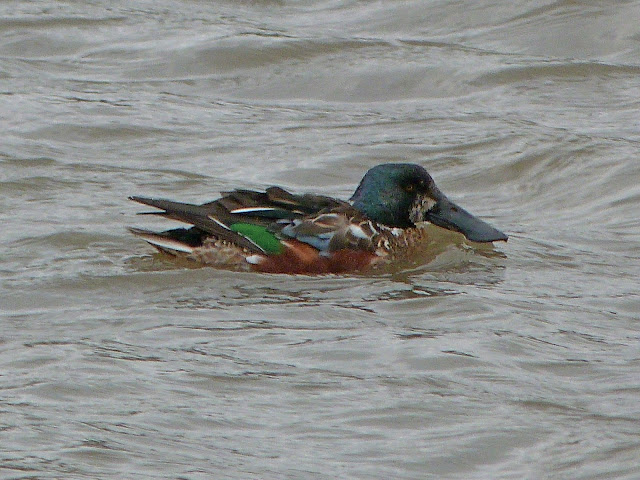 The meadow only held a few (Eurasian) Wigeon, Gadwall, (Eurasian) Teal and (Northern) Shoveler including this first winter male (above). They always seem the last of the male dabblers to reach adult plumage...


﻿
Now there are those that consider spring starts on the 1st March and there are those that believe spring starts with the vernal equinox, around the 21st March, but I maintain, as in the Celtic tradition, that the vernal equinox is mid-spring (as the summer and winter solstices are mid-summer and mid-winter respectively and the autumnal equinox is mid-autumn). Therefore spring actually starts sometime in early February...well that's my belief and if it was good enough for the ancient Britons then it's good enough for me!

If you needed further proof that spring has already arrived then a couple of early migrants dropped in on Tuesday... a pair of Red-crested Pochards...

Now you could be cynical and say that they are just escapes or wandering naturalised birds but early spring is a very good time for migrant ducks. Garganey are well known early migrants and of course The Swannery has previous with rare early spring migrant ducks, such as the March 2010 Bufflehead and the March 2004 Lesser Scaup (both of which passed muster with the British Birds Rarities Committee) not to mention last March's Wood Duck (which may or may not be a good example)!

The only other noteworthy ducks at The Swannery this week were the three Long-tailed Ducks and the ten Scaup still...


The two single scarcer grebes - the Black-necked and the Slavonian were seen off and on all week, the former more frequent than the latter.
The male Marsh Harrier was present Tuesday to Thursday at least but as you may have noticed from the comment on last week's post it does get around a bit, being seen as far east as Radipole RSPB Reserve and as far west as West Bexington DWT Reserve.

The Lapwing flock reached three hundred again mid-week and held a single Golden Plover and half a dozen or so Redshanks. There were a few gulls around but I can't even remember seeing a 'Med' this week let alone anything of more note. Passerines too failed to gain an entry in the notebook, a single Chiffchaff probably being the highlight.

So the birds of the week award will have to go to the Red-crested Pochards, whatever their origin...


The very low water in The Swannery embayment this week did not deter the Long-tailed Ducks despite the species having being recorded at the greatest depth (60 metres) of all the diving ducks. They would have struggled to get down to two feet let alone two hundred early this week but all three were present from Tuesday to today (but I only saw two on Monday). Likewise all ten Scaup were present on a couple of days at least but during today's Wetland Bird Survey (WeBS) count only seven were seen. Both the Black-necked and the Slavonian Grebe were seen on Monday but the former was only seen again on Saturday and the latter not again until today. Dabbling duck numbers have been fairly low and the only goose of any note was a Dark-bellied Brent lingering on Friday. Gull numbers too were pretty poor with only the few 'Meds' seen worthy of a mention. Having dropped right off to around fifty the Lapwing flock doubled to around a hundred again yesterday but very few showed for the count today. Thirty plus Redshank were present on Wednesday, although only single figures were around the rest of the week, along with one or two Oystercatchers and a few Snipe. The regular (now third calender year) male Marsh Harrier was only seen on Thursday and there was no sign of any potential mates. The only new-in passerines were a few Siskins, the first since early December but a couple of Jackdaws amomg a flock of around a hundred showed a hint of a pale collar so may well have been of the Scandinavian form colloquially known as 'Nordic Jackdaw' although unfortunately I wasn't able to get close enough to photograph them.


The full results of today's Swannery WeBS were...

Thanks again to all the WeBS counters for turning out on a very wet and muddy morning. It's not always raining on count days of course...more times than not it's a brilliant morning spent birding in wonderful surroundings....err incidentally there is currently a vacancy for a volunteer counter on The Fleet, either for the Bridging Camp to Chickerell Hive section or possibly (if preferable) the Herbury to Rodden Hive section. If you are interested in doing a bit of counting during your birding on a Sunday morning once a month please either leave a comment on the blog or phone me at The Swannery on (01305) 871684. If it's in the evening then leave a message and I'll get back to you. Thank you in anticipation.
My camera didn't see the light of day this week so I'll leave you with a couple of shots of the 'Slav' Grebe that Charlie took last week...

Thanks Charlie & Dave for the use of your pics. Hopefully I'll have a few of my own next week!

'And Then There Were Three...Again'

There was some substantial disturbance in the embayment again early in the week with rather eerily not a single duck or grebe present but things settled down again as the 31st January passed and February began.  All ten Scaup were present at the beginning and end of the week but it took until Wednesday for me to find the remaining Long-tailed Duck. On Friday however, after their sojourn to Portland Harbour and who knows where else, it was re-joined by the other two and all three were still present today. The pair of Goosander though were only seen on Wednesday and Thursday and there was no sign of the Barnacle Geese all week.

The Black-necked Grebe was only seen on Wednesday but was replaced from Thursday to Saturday by a Slavonian Grebe, the first of the winter...

There were still around fifty Dunlin accompanying the three hundred plus Lapwing flock at the beginning of the week but not later and as expected at this time of year, Lapwing numbers began to drop off by the weekend. A few Snipe, Redshank and the odd Oystercatcher were the only other waders noted.
﻿
﻿
Larid numbers were fairly low with a few Meditteranean Gulls being the only highlight. Auks are always a rare sight in The Swannery Embayment, so a Guillemot present on Wednesday, would've been a good record if it wasn't for the likely circumstances...it was presumably contaminated with the mystery substance that brought so many ashore dead or very weak on the seaward side of Chesil Bank this week. It was not weak enough to enable capture though and soon disappeared. Let's hope if it deteriorated further that it was rescued elsewhere.

The now resident male Marsh Harrier was joined by an adult female again briefly this week, though I'm not sure if it is his mate from last year. Whether it is or not I hope she reappears later in the spring and they try another more successful nesting attempt this summer.


My fears for the over-wintering small insectivorous passerines during last month's cold snap were thankfully largely unfounded as several Cetti's Warblers are now singing and calling from the edges of the reed beds and at least one Chiffchaff is around. There are still a few Goldcrests too but no sign of the Firecrest unfortunately. The influx of thrushes now seems just a memory, with only very few Redwings and numbers of Blackbird, Song and Mistle Thrush are pretty much back to 'normal'.
During pretty unpleasant conditions (strong winds and squally showers) at the beginning of the week, I was filmed talking to Nick Baker from BBC Southwest's 'Inside Out' who are doing a feature on the wintering birds on The Fleet. All they could really get shots of though at the Abbotsbury end were the swans on one of the ponds as The Fleet was so rough. If I hear when it is being screened I'll let you know.