...And there were two further brief sightings of a single Cattle Egret on the 26th and 30th.

Much more cooperative though was the Grey Phalarope which lingered on Meadow Pool from the 15th to the 18th...


Commoner wildfowl numbers continued to rise and peak counts of wildfowl were:

Other Water Birds...
Apart from the aforementioned Cattle Egrets there were no noteworthy sightings and peak counts of the commoner species were:

Waders...
In addition to the aforementioned Grey Phalarope, other noteworthy sightings were of a Little Stint also on Meadow Pool from the 12th to the 15th and even rarer in a Swannery context, a Spotted Redshank on the 2nd (the latter frustratingly missed by me!).

Terns & Gulls...
Two juvenile terns that were either Common Terns or Arctic Terns were glimpsed briefly on the 15th as they headed off west and two Sandwich Terns were present on the 17th...


Mediterranean Gulls were regular and peaked at fifty on the 13th; an adult Yellow-legged Gull was present on the 21st while single first-winters were seen on the 5th and 22nd. Only a single Common Gull was noted and no more than singles of Lesser Black-backed Gulls were seen at any one time.

Peak counts of commoner species were:

At least one Osprey was seen regularly from the 4th to the 29th... 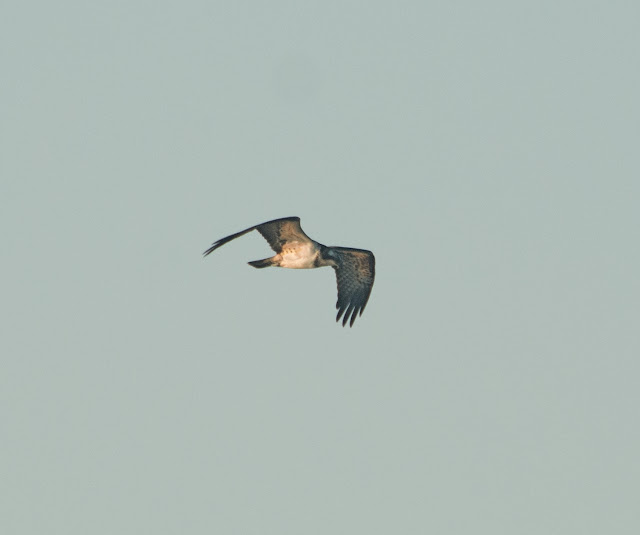 ... Three juvenile Marsh Harriers were seen on the 1st with singles then regular through the month and an adult male was seen on the 28th and 29th. Single Hobbies were seen on five dates through the month and single Merlins on the 15th and 29th and single Peregrines were regular too as of course were Sparrowhawks, Buzzards and Kestrels. A few 'heard only' Tawny Owls were the only owls reported.

Other Non-Passerines...
A late Swift was seen on the 6th; whilst at least two Kingfishers were seen regularly. Other species noted in varying numbers were Feral Pigeon, Stock Dove, Wood Pigeon, Collared Dove, Green Woodpecker and Great Spotted Woodpecker.

Passerines...
In what is proving to be a very good autumn for Goldcrests there were also at least three Firecrests with one on the 12th and two on the 29th.  It also proved to be a good season for Whinchats with a marked passage from the 1st to the  21st including a peak of ten on the 3rd. As the Whinchats tailed off towards the end of the month Stonechats began to reappear again with a peak of five on several dates, whereas Wheatears were seen throughout with a peak of seven on the 1st. As there were none in the spring the first Spotted Flycatcher of the year was seen on the 5th with another on the 17th. Yellow Wagtails were regular all month but peak counts were of only of around ten.  Swallows however peaked at around a thousand on the 25th with House Martins peaking at only around fifty on the same date and Sand Martins peaking at about ten on several dates. As to be expected Willow Warblers and Chiffchaffs were fairly equal in number early in the month but the former tailed off rapidly later, with the last seen on the 25th. Blackcaps and a few Whitethroats were seen throughout as were several Cetti's Warblers of course but the last Reed and Sedge Warblers were seen on the 17th. Siskins and Meadow Pipits were a fairly constant overhead feature but counts of a hundred plus of each weren't recorded until the end of the month. Linnets and Skylarks were also on the move but in fewer numbers as yet and there was only one Rock Pipit on the 15th.

And that's it for this month except to thank Charlie Wheeler wheeler-photography for the use of the Cattle Egret, Mandarin and Osprey photographs.