Bird of the week was the Cattle Egret present on Friday afternoon. The eleventh record for The Swannery (the first was in 1998) it flew past me while I was doing the commentary for the 12 o'clock feed and then settled on Shipmoor Point opposite for the best part of an hour. I didn't see it again until the 4 o'clock feed when I picked it up flying toward a field of cattle on adjacent Linton Hill. It doubled back however and dropped down on the Chesil behind the Shrubby Seablight and I didn't see it again.

Lingering wildfowl included the Common Scoter (now confirmed as an adult female, due to its dark belly), the first summer male Goldeneye, the presumed escaped male Pintail, the feral Greylag Goose and the two escaped/feral Black Swans that were joined by a third at the end of the week. Incoming wintering duck included up to thirty Teal and a few Shoveler and Gadwall joining the commoner resident and over summering duck. Other waterbirds included six Little Grebes which were new in (all adults, suggesting a poor breeding season) and the first Water Rails of the autumn were heard.
Raptors included the now resident male Marsh Harrier which colleague Charlie witnessed locking talons with a second bird today, although it is unclear if this was its mate from the spring or just a passing migrant. A couple of Hobbies were also seen one of which caught a dragonfly over the meadow pool this afternoon.
Waders still trickled through with single figures of Lapwing, Dunlin, Green Sandpiper, Common Sandpiper, Redshank, Black-tailed Godwit, Whimbrel and the first returning Snipe.
Land bird passage was underwhelming with only a couple of Yellow Wagtails, one Spotted Flycatcher and one Wheatear noted whilst warblers were a little more numerous with many Chiffchaffs, Blackcaps, Whitethroats, Willow, Reed and Sedge Warblers seen and ringer Steve Hales extracted a Grasshopper Warbler from his net. A few Swifts were still passing over along with more numerous Swallows, House and Sand Martins.
At the time of posting the Cattle Egret has still not been reported again either in Abbotsbury or anywhere else so may well be lurking in a cattle field away from regular birding spots. Hopefully it will surface again next week...

Unseasonal lingering wildfowl included the Common Scoter, the Goldeneye, the Pintail and the Greylag Goose.

Raptor highlights involved two Marsh Harriers - the regular immature male (that is now looking more like an adult at every sighting) and a juvenile. Ringer Steve Hales also reported a Hobby trying its luck over the swallow roost one evening either early in the week or last weekend.

There were again no terns but there were singles of adult Mediterranean and juvenile Yellow-legged Gulls (the latter the first of the autumn).

Land bird migrants included up to thirty Swifts still present at the beginning of the week, good numbers of Swallows, a few House and Sand Martins, a Grey Wagtail, a Yellow Wagtail (there were around a hundred this time last year), a few Wheatears and numerous Willow Warblers.

The results of this morning's WeBS survey at The Swannery (with a few additions seen later in the day) were:

Thanks as always to Swannery counters Alan Barrett, Ian McLean and Mike Morse and for that matter to the other guys elsewhere on The Fleet (you know who you are).

Wildfowl highlights included the Common Scoter that reappeared on Monday and then lingered all week, the male Pintail that also showed up again, the summering male Goldeneye and the five Shoveler. There were no Wigeon but Teal reached twenty by the end of the week and the Greylag Goose still lingered.

As for other waterbirds a couple of Little Grebes are now back from nearby breeding territories, joining good numbers of Great Crested Grebes - some of which over-summered - but also include a few in-coming juveniles (no grebes breed at The Swannery probably due to the fact that high spring tides reach even this far up The Fleet). A dispersing Kingfisher, the first of autumn,  was also seen this week.

The male Marsh Harrier returned once again but the best raptor of the week was an Osprey on Thursday and Friday trying its' luck with the local mullet (which I have to say having barbecued a few for our lunch at work, with flavouring provided from the 'monks herb garden', are rather good).

Wader migration was still in full swing with highest daily totals being ten Oystercatcher, one Little Ringed Plover, three Lapwing, one Knot, sixteen Dunlin, five Black-tailed Godwit, four Common Sandpiper, four Green Sandpiper, one Greenshank, two Redshank and last week's bird of the week the Wood Sandpiper still lingers this evening, eight days after its first arrival. Unfortunately the Buff-breasted Sandpiper, found at the other end of The Fleet at Ferrybridge on Thursday evening, didn't drop in at The Swannery despite flying off west from Ferrybridge shortly after dawn on Friday. A pity as it would have potentially been a new bird for The Swannery, although there is a previous record for The West Fleet but where on The West Fleet is not clear.


A rather late arrival of post-breeding Black-headed Gulls thankfully included many juveniles despite the awful spring and early summer and a couple more Mediterranean Gull juvs also accompanied them. The only tern though was a single Common Tern on Wednesday.

Of the landbirds a few Swifts still lingered with House Martins and now good numbers of Swallows and Sand Martins. Earlier in the week the first Yellow Wagtail of the autumn flew over and today three Wheatears were on the reed-barn track to add to last weeks first of the season. The roaming tit flocks this week again held numerous Willow Warblers and ringer Steve Hales pulled the first Garden Warbler of the autumn out of his withybed net, while his reedbed nets produced several Sedge Warblers. 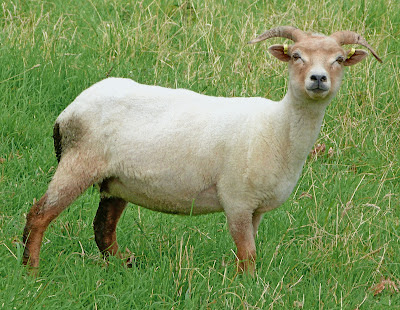 This weeks wildfowl were little changed from last week with the reappearance of the Common Scoter (Monday to Friday), the two Wigeon still, a Gadwall, the five Shoveler and the Goldeneye among the usual resident and over-summering duck. The Greylag Goose lingers too (along with now up to six Greylag x Canada Goose hybrids - four of them white domestic types) amongst the Canada Goose flock. 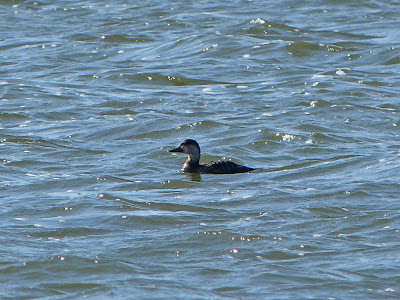 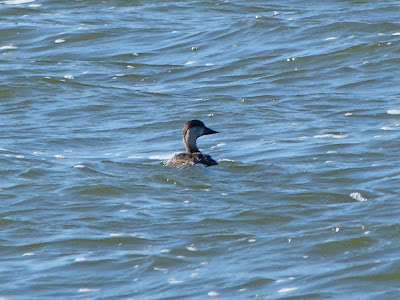 After its reappearance last week the summering male Marsh Harrier went missing again this week and no other noteworthy raptors appeared.

Waders were again in evidence with one of the two failed breeding pairs of Oystercatchers still lingering and the returning (non-local) post breeding Lapwing 'flock' struggled up to four. Surprisingly the single Dunlin on the meadow pool today was the only one all week but today's Whimbrel was the second. Also only one Redshank went into the log but up to seven Common Sandpipers were present daily, as were up to four Green Sandpipers. This weeks bird of the week award though (despite the presence of last week's Common Scoter) was the Wood Sandpiper on meadow pool yesterday and today. 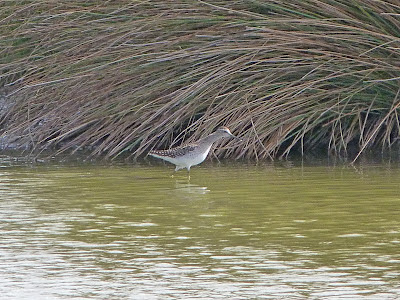 There were only four brief Common Terns all week so the 'breeding' birds have now moved on and there were no other tern species seen and no gulls of note (not even a 'Med').

Of the land birds a few Swifts still linger feeding along with seemingly reduced numbers of Swallows and both House and Sand Martins but the first returning Willow Warblers and a Wheatear truly signify the start of autumn.

As for other fauna... Dragonflies and Damselflies have been much more in evidence this week...

Oh and just for the record...