Following on from last month's single day sighting an adult Roseate Tern was again present for one day around the tern island on the 21st... 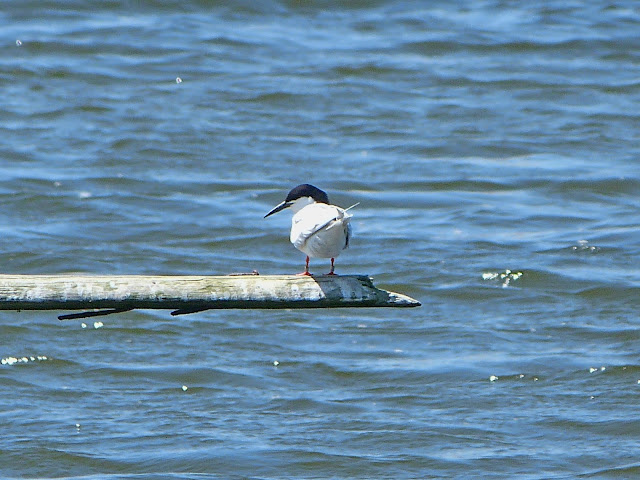 Just like last month's bird it bore rings on both legs and it may well have been the same individual (although again I was unable to read the rings).

And now the rest of the news...

Waterfowl...
With no particularly unusual sightings peak counts of the commoner breeding/over-summering wildfowl were:


Other Water Birds...
What would have been the highlight of this category, if confirmed, was the Bittern reported in flight briefly on the 25th but as it was not seen again the title falls to a juvenile Gannet keeping company with the swans on the 1st... 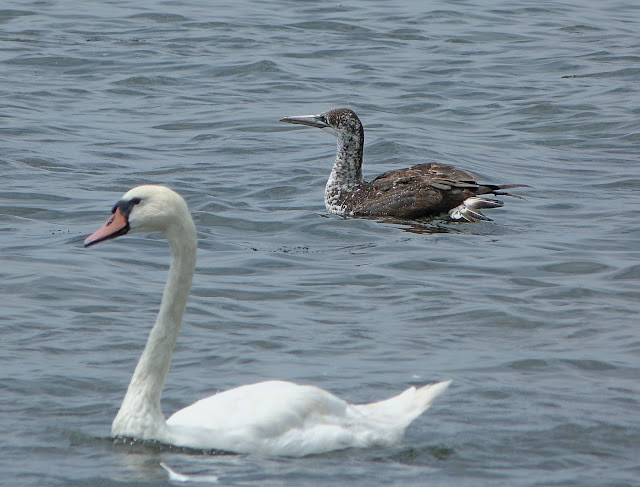 Peak counts of the commoner species were:

Waders...
Of the  two pairs of nesting Oystercatcher, the ones in the grounds fledged one of their two young, whereas the pair from the Tern Island laid a replacement clutch but failed again. With no extras seen five was the peak count.


No other wader species bred but post breeding dispersal and early return migration meant that there were quite a nice selection of other waders noted... Lapwing peaked at seven; single Whimbrels were seen on the 3rd and 30th...

A Curlew was seen on the 7th; Black-tailed Godwits were noted on three dates with a peak of five on the 17th, a Turnstone lingered from the 23rd to the 26th; a Knot appeared on the 24th; as did a Sanderling on the 26th; Dunlin peaked at fifty on the 27th...

Common Sandpiper peaked at 4 on the 16th and there were two Green Sandpipers on the 21st and again on the 31st...

There were two Greenshanks on the 6th, with further singles on the 17th and 26th and Redshank peaked at three on the 1st.

Terns & Gulls...
The fifty or so pairs of Common Terns on the Tern Island began fledging their young and it is believed that around one-hundred and five are set to fledge in total this year...

A few non-breeding Sandwich Terns continued to be seen but the 'Eastern-type' Common Tern that has been visiting the tern island for the last few seasons was only seen briefly on a couple of dates mid-month...


There were quite a few Mediterranean Gulls seen, culminating in a peak of twenty plus for several days mid-month, which included many juveniles and at least one juvenile Yellow-legged Gull was seen regularly. 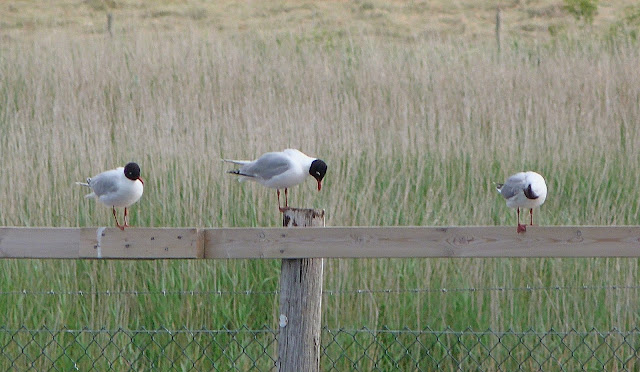 A Common Gull was rather unseasonally seen on the 17th, otherwise there were just varying single to double  figure counts of Black-headed Gull,  Lesser Black-backed Gull, Herring Gull and Great Black-backed Gull .

A Hobby was noted on the 1st and at least one juvenile Marsh Harrier was seen regularly late in the month (whilst an unaged bird was seen on the 9th). Unlike last month there were several Peregrine sightings but the only other raptors seen were the usual Buzzards, Sparrowhawks and Kestrels, whilst yet again the local Tawny Owls were regularly heard if not seen.

Passerines etc...
A flock of around ten, presumably local breeding, Swifts were seen regularly in the first half of the month at least and were joined by similar numbers of (again local breeding?)  Swallows and House Martins. At times though there were also up to fifty (non-local breeding) Sand Martins. The only other passerines to make the notebook were Siskin, with an unseasonal flock of twenty on the 3rd and a few Stonechats and a Bullfinch neither of which bred on the patch this year, though unlike the Siskins, did no doubt do so nearby.

And that's it for this month except to say sorry yet again for the late post (almost a month behind still!) but my laptop is behaving a little better now so  I shall endeavour to post my August more promptly!

Posted by Steve Groves at 15:09 No comments: