Despite the glorious spring weather I've still not notched up any proper Sub-Saharan passerine migrants, even though Wheatears and Sand Martins have been seen elsewhere on The Fleet and many shorter distant migrants like Chiffchaffs and Blackcaps are much in evidence. I did have a brief White Wagtail on the tern island however, as I was watching my first Sandwich Terns of the year - belatedly - after hearing that I had actually missed some last Sunday. 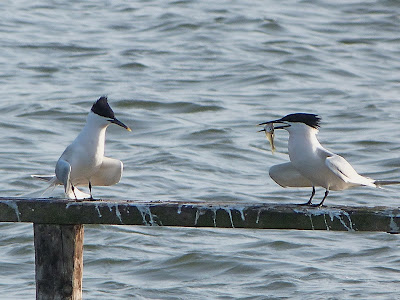 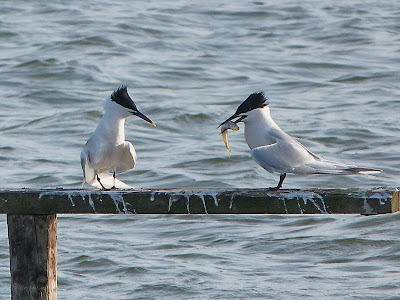 On a couple of days there were 20+ birds in the swannery embayment. Their harsh calls a sure indication that spring has well and truly arrived.


There were also several leftovers from last week namely the drake Wood Duck of unknown (but perhaps more likely captive) origin, the two drake Scaup (although one departed Friday night) and the three Barnacle Geese. If the latter are wild birds as suspected, then they do appear to be lingering a fair while but having seen them close up in flight this week (as they have been rather restless) I may have discovered the reason why... one of them has very badly damaged primaries on one wing and although it was circling the swannery with no apparent problem a journey back to the arctic may be slightly more problematic. If they are a family party then the other two birds may be reluctant to leave it. It will be interesting to see what happens over the next few days.
Including the above three main headliners there has been a nice selection of waterfowl still, with sixteen species present this week. One of the most noticeable being Shelduck with a real influx being apparent and all preoccupied with pairing up... 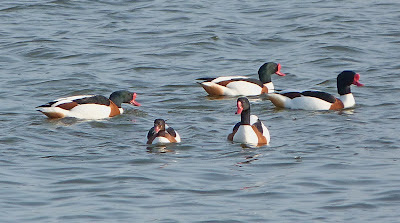 A distant Tringa type sandpiper at the back of the meadow (and not viewable from the hide) eventually gave itself up as a Green Sandpiper and not, unfortunately, the hoped for Tattler that was reported in Poole Harbour. Well one can dream! The only other waders have been a few Redshank, Dunlin and Snipe.

As well as the early migrants mentioned earlier the East Fleet still holds the over-wintering Hume's Leaf Warbler at Littlesea Holiday Park and the Richard's Pipit by the adjacent Bridging Camp. Why the birding sites keep referring to these birds being at Wyke Regis when they are both slap bang in the middle of the parish of Chickerell is infuriating. They are both closer to the Weymouth parish boundary than to Wyke Regis! This echoes all the rarities that have turned up at Rodden Hive on The Fleet being reported as being at Langton Herring when actually Rodden Hive is in the parish of Abbotsbury! Sorry I digress but being a Chickerell boy born and bred and now having been a Abbotsbury resident for about a third of my life I'm very loyal to my parishes. Civil parishes that is, as, it has to be said, I'm very far from a church goer!
Posted by Steve Groves at 18:52 No comments:

When are 'wildfowl' not really wild at all but 'escapefowl' or 'feralfowl'? A difficult one to call if the bird in question is fully winged, unringed and in fine fettle. The week and its' problem waterfowl started with three Barnacle Geese dropping in almost a week to the day that the last lingering bird departed. The same three birds had been seen further down The Fleet the day before and are rather skittish and staying out in the meadow rather than joining their feral Canada Geese cousins in the grounds. Are they tardy arctic breeders or are they part of the growing naturalised ('feral') British population? Then on Tuesday two drake Mandarin Ducks arrived. There was a time when any Mandarin arriving here at The Swannery would be assumed to be an escape but now with a healthy naturalised population in Dorset these two wary birds were perhaps more likely to be 'feral'? Then today the biggest headache of the lot a stunning drake Wood Duck arrived. Now Wood Ducks are very closely related to Mandarins being with them the only two species placed in the genus Aix and like them they are very common in captivity. For this reason, despite some intriguing records, they are not included on the British list as the powers that be believe the escape likelihood out ways the chance of a natural occurrence. However they are also one of the commonest wild ducks in North America and Canadian breeders can winter as far south as the Caribbean so as with many American ducks crossing 'the pond' may not be a problem for them. An (American?) Blue-winged Teal turned up in Cornwall a couple of days ago... are any birders suggesting that's an escape? Now the 'Woody' in question is not exactly wary (although maybe a little more so than the Mallards it's associating with) but are all wild Wood Ducks in America wary? A Ring-necked Duck a few years back here came in for wheat and that wasn't deemed an escape, indeed there are many wild ducks at The Swannery that aren't wary (and don't even get me started on the three Red-breasted Geese records)! 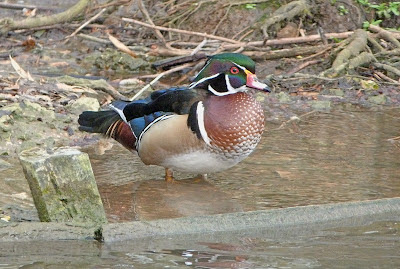 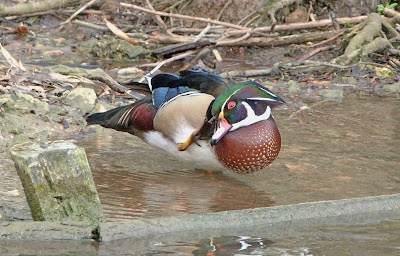 Untarnished wildfowl have also been hitting the birding headlines here this week though...
Four Garganey (two drakes, two ducks) arrived on the same day as the Mandarins and graced the meadow pool for a few hours, but like the latter, they'd departed by the following day. Also the two drake Scaup are still lingering.
Otherwise it has been a fairly quiet week and apart from a few Blackcaps and Chiffchaffs there has as yet been no 'proper' summer migrant passerines. I do however expect my first Wheatear, Sand Martin and Swallow any day now in the sure knowledge that they, like the Garganey, have flown all the way from Africa rather than from the nearest Aviary!
Now a bit of a plug... if you've enjoyed The Swannery birding highlights over the last few months you can now pay us a visit as we opened to the public yesterday and will be open every day until the end of October. We even have a few nesting swans already with two clutches of two and we are expecting over a hundred nests before the spring is out and maybe the odd rare bird too!

Posted by Steve Groves at 19:43 No comments:

A fair to middling kind of week really...

New in were a pair of Goosander on Wednesday and Thursday but far  too distant to snap... The lingering Black-necked Grebe though was at last a bit more co-operative... 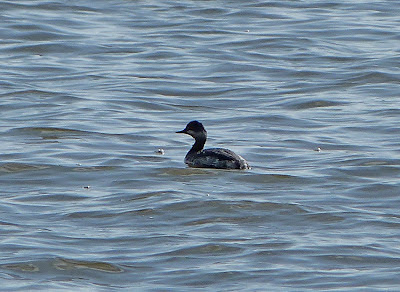 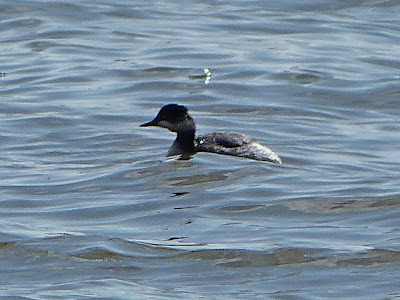 A single Knot too was close enough to get some decent record shots at least... 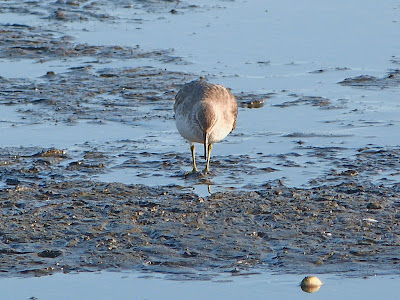 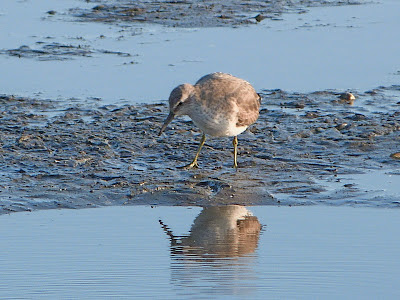 The week was in fact fairly good for waders with some low water and lots of mud. I had what I believe to be a swannery record count of 60+ Redshank and there were also a couple of Curlew, a few Dunlin, the returning breeding pair of Oystercatchers and a Green Sandpiper, though Lapwing and Snipe were notable for the absence by the end of the week. There was also a good lot of gulls around earlier in the week but the best I could find was a 1st winter Yellow-legged.


There was a notable influx of Little Egrets this week (after a few succumbed to the cold snap last month), with many of them field feeding, they all had to be checked to see if there wasn't a Cattle Egret among them... but there wasn't...

Today was the Wetland Bird Survey count for March and the results for The Swannery and the adjacent Abbotsbury stretch of The Fleet were:


Look at that habitat in the Pintail photo... is that not oozing for a Glossy Ibis or two, just like the ones at nearby Radipole at the mo'... come on guys come over and check it out!
...
Posted by Steve Groves at 18:49 No comments:

The First 'Ping' Of Spring!

There is not much new to report this week with most of the highlights being the same as last week. It turns out that the last sighting of the Barnacle Goose was the date of my last blog so a good departure date for a genuine wild bird, as suspected. Otherwise the first winter male and the adult male Scaup, along with the hybrid female, were still present, as was the Black-necked Grebe, female Marsh Harrier, two Curlews and a few Mediterranean Gulls. In addition to the Scaup a nice selection of ducks could be seen in varying numbers, namely Shelduck, Wigeon, Gadwall, Teal, Mallard, Pintail, Shoveler, Pochard, Tufted Duck and Red-breasted Merganser. There was less diversity among the waders though... as is usual at this time of year the Lapwing flock was fast diminishing and only a few Redshank and Snipe joined the aforementioned Curlews. In the reed beds one or two Cetti's Warblers were calling and a few Chiffchaffs singing, while new in... at least one Bearded Tit was pinging.
Posted by Steve Groves at 17:52 No comments: