I'm a day late with my post this week as I worked on Sunday, watched the England game in the evening and after that debacle I just didn't have the enthusiasm!

Back to the birds though... post breeding dispersal was again the order of the week, with a very unseasonal Goldeneye the biggest surprise. I presume it is the returning second calendar year male that lingered into May, while an equally unexpected adult male Pintail is also likely to be the 'dodgy' Mallard loving bird that was last seen in mid-May (and was reported from the village pond in the interim).

The only reappearing local post-breedering passerine to add to last weeks tally was a Mistle Thrush but many family parties of passerines are now coming out of the woods so to speak.

A few waders have began to reappear too... with single Lapwing, Curlew and Redshank going into the log, whilst on the island the Oystercatchers have hatched four chicks and the washed out pair in the Swannery grounds have relayed a clutch of two on only slightly higher ground (which almost suffered the same fate as the first with the heavy rain on Saturday night!). A Mediterranean Gull (a first summer) was the first for several weeks, whilst the nesting Common Terns are still doing well and frequently joined by passing Sandwiches (if you know what I mean) but unfortunately nothing rarer.


The male Marsh Harrier still lingers but the bird of the week award has to go to a very flighty Turtle Dove that gave me the run around on Tuesday.


So with the first returning waders there is hope of something a bit more unusual and with the tern island bustling may be a rare tern too... that would be a better result than the England game!

Posted by Steve Groves at 21:34 No comments:

Another rather quiet week bird wise, if not weather wise... the highlights being the lingering male Marsh Harrier and a Hobby over but there was little else of note as the near gale force winds failed to blow in to the sanctuary of the lagoon any hoped for passage seabirds.

Despite the awful weather the Common Terns are still settled on the island and in fact even more pairs have arrived and appear to be nesting, with over thirty individuals around the island at times. A few Sandwich Terns are still about and the pair of Oystercatchers are still incubating on the island too (the latter species being the only waders of the entire week!).

Although migration seems to have ground to a halt post breeding dispersal seems to already be underway as a few species not seen for a month or so are beginning to reappear, such as three Teal, Treecreepers, a Nuthatch and Bullfinches, none of which bred at The Swannery this year but, at least in the case of the last three, did so elsewhere in Abbotsbury.

The water level in the meadow is still high with all the rain, despite the sluice being out again, but hopefully it will drop soon, just in time for all those early waders returning south!
Posted by Steve Groves at 19:46 No comments:

What A Wash Out!

It's been a very quiet week with very little to report. The regular pre-moult build up of feral geese has reached it's peak with the arrival of several hundred Canada Geese but apart from the usual Greylag hybrids the only other dodgy goose amongst them was a Bar-headed and for one day only. On the subject of feral wildfowl... in case you haven't checked out my blog since my last weekly roundup, check out Thursday's post on the Black Swan fiasco. The dozen Gadwall were still in the flooded meadow but the brood were not seen again and although we have over-summering Tufted Duck and Pochard no young have yet been seen.

At least one of the Marsh Harrier pair is still lingering, the male, but there have been no positive sightings of the female this week and no other raptor sightings of note. It was of course the torrential rain and unseasonal high tides back in April that was responsible for, we believe, the destruction of any nest the harriers had but even more unseasonal high tides this week also put paid to one of our Oystercatchers' nests on The Swannery nest site (and five late swans nests too). The Oystercatcher pair on the tern island though were high if not quite dry so are still ok we hope. As are, for the moment at least, the Common Terns but it was in similar atrocious June weather last year that they deserted so fingers crossed. Up to twenty individuals have been seen again this week but only about five pairs seem to be nesting. Visibility though on the island is not great, despite attempts to clear the Sea-beet it has come back with a vengeance, so it is hard to make out the sitting birds. The only passage waders this week were a flock of forty Dunlins heading east. 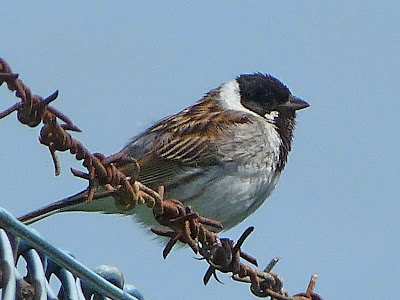 Unfortunately there has been no further sign of the Spotted Flycatchers or Lesser Whitethroats that were holding terrritory last week but the Rock Pipit was still on its usual 'winter' territory on Bum Point so that speaks volumes!

The Black Swan At Abbotsbury.

This post is a bit of a change from my weekly roundup of Swannery bird sightings, which will follow on Sunday as usual. I just felt I needed to comment on the ludicrous stories that have appeared in the popular daily press recently and on the internet about the arrival of a Black Swan at Abbotsbury Swannery, about which staff and birdwatchers are apparently mystified! What a complete and utter fabrication... and what's more I have been 'quoted' (misquoted more like), or at least  Deputy Swanherd Steve Graves has, whoever he is! As any local birders know (and many regular Swannery visitors), we have had Black Swans visiting the Swannery for over twenty years now, with up to ten being present one year. Even this year we have two that have been present since February, which is not surprising seeing that there is a thriving introduced population in Britain now with between fifty and one hundred individuals being at large (depending on the source) so why would we be mystified by its appearance? The first I knew about this rubbish was when a local reporter phoned me up asking about the Black Swan that had just arrived... to which I explained that we have two and that they haven't just arrived. A fact he chose to ignore. Whats more a photographer duly arrived to photo the one Black Swan and was most surprised to discover we had two. It then took him two visits to get a photo of the one Black Swan without the other getting in the way just so they could perpetuate this garbage. What's that all about? Why lie? The truth is wonderful!

The Summer Slowdown Sets In

With spring migration all but over it was a rather quiet week. There was no sign of the Black-winged Stilt Monday morning so it had obviously departed overnight leaving the meadow pool empty save for up to twelve adult Gadwall including a female with a brood! This sight no longer an annual occurrence here.


The Common Terns do now seem to be nesting with a least five pairs present on the island but up to twenty individuals have been seen in the Swannery embayment this week. Unusually for this time of year up to twenty Sandwich Terns have been present too but they have not shown any interest in the island.


The two pairs of Oystercatcher are still nesting and three other individuals were present too. A few passage waders were noted with eight Dunlin, two Whimbrel and a Greenshank, although none lingered for long.


Passerine migration was little in evidence save for the odd tardy Swallow and House Martin powering up The Fleet but a Rock Pipit at 'Bum Point' was most unseasonal and I had to grill it to make sure I'd made the right call.

The male Marsh Harrier was seen off and on and the female was seen hunting over cereals nearby so they may still be making another nesting attempt in the area if not actually with us?

My most interesting sighting though was not a bird at all but a Water Shrew. We find the odd dead one from time to time but live sightings are few and far between!

Posted by Steve Groves at 19:40 No comments: